Learning Snowsports On An Artificial Surface Verses Learning On Snow 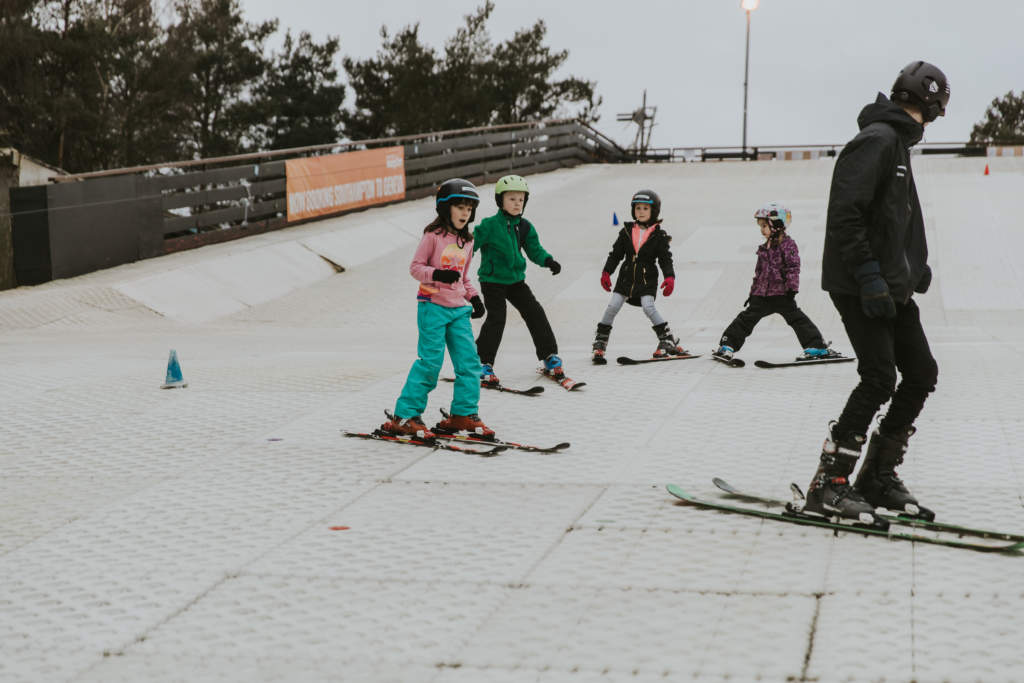 My present role is operating Snowtrax (artificial) Ski Centre in the South of England. I have taught skiing in the mountains and on artificial ski surfaces. Through research at Snowtrax, we have combined the best of UK teaching systems to create specialised lesson plans for the artificial environment.  Formerly, for many years I held the position of Coach and Tutor for Snowsports England. I was also an active IVSI and BASI member.

LEARNING IN THE MOUNTAINS (ON SNOW)

When one thinks of skiing in the mountains, visions of blue skies and white fluffy snow with groomed pistes spring to mind! But one rarely encounters perfect conditions. Snow storms, white outs, blizzards, icy pistes, and variable terrain offer multiple challenges to the skier or snowboarder. With a beginner, the demands are greater due to having to cope with equipment that they are unfamiliar with and having to learn a new skill in an ever-changing environment.

Accidents often occur when beginners make the transition from skiing very shallow terrain on nursery slopes, to green and blue runs without the required skills. The techniques mastered on flat terrain and groomed pistes will often need further development before the learner can master skiing steeper gradients and a variety of terrain. A good instructor will minimise this risk. With beginners that take ski lessons in the mornings only, under the guidance of ski schools – accidents are a rarity. Beginners left to fend for themselves, who opt to ski with friends or peers in the afternoon, are most at risk from serious injury. They can quickly lose confidence when skiing without the instructor and consequently can find themselves in situations that they cannot cope with physiologically or physically. This can result in being unable to perform even the simplest of manoeuvres. Learning in the mountains is far less predictable and potentially more of a challenge due to the variety of previously stated factors, plus the issue of high speeds achievable when losing control on steeper slopes presenting a danger to others and to the beginner.

LEARNING IN AN ARTIFICIAL ENVIRONMENT

Most of the problems described above can be eliminated with a combination of a well-designed artificial ski facility and a safe surface. In a closed environment with predetermined gradient angles for slopes to progress from gentle to steeper gradients. Due to the uniform slope, it is possible to very closely monitor drills; then deliver highly personal lesson plans that work on specific aspects of every movement involved in skiing. This makes the artificial environment safer, predictable, and is an ideal vehicle to transport the beginner safely to an intermediate or advanced standard of performance, under the supervision of a ski instructor.

For students learning to ski on an artificial surface there is a transition period on average of a day or so when transferring from an artificial surface on to snow. Providing the gradients are similar to each other, but the time taken will vary depending on the individual. This is the period to get used to a snow surface and new environment. I have personally witnessed skiers who I have taught on our artificial surface and then on snow, performing almost without a break in the progression, from one surface to the other, due to the high standard of personal technical performance already achieved.

Founded in 1989, Snowtrax has been actively testing artificial ski slope surfaces for nearly 30 years, resulting in the installation of Proslope HDPE matting. We have discovered that the material offers a fantastic level of friction control, making it extremely fast for all snow sports including ski bobs and ringos, making it a truly multi-purpose surface. It offers the closest performance to snow with accurate progressive edge grip and release. When falling on Proslope injuries sustained are a rarity. The Ski and Snowboard experience inspires confidence and the learning progression is quicker on this surface compared with other established artificial surfaces.

At Snowtrax the Proslope surface is used for all snowsports related activities. Recreational ski and snowboard sessions, a ski race club with approximately 120 slalom racers (ranging from 5 years old to adults) and a freestyle club with a regular international competition called AIR ATTACK. The Ski and Snowboard School runs a variety of lessons, all designed with progression and age-suitable content. These sessions include:

Participation in snowsports at the centre topped over 25,000 visits. An additional 25,000 children and adults have taken part in tubing and tobogganing on the dedicated areas for these activities, total visits including parties’ conferences, and alpine park visits total 125,000.

The accident data collected at Snowtrax has shown a considerable increase in numbers using the facility, with a very high percentage in the reduction of accidents. Data is available upon request.

The advantages of learning skiing and snowboarding skills at a quality artificial facility cannot be overestimated. In a closed environment with a surface that is consistent, offering all the year-round availability, technical performance can be achieved to the very highest standard. In the mountain open environment, the variety of conditions coupled with natural varying terrain confronts the performer with a far greater challenge.